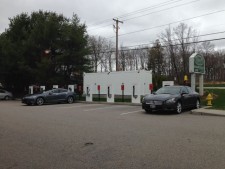 Superchargers appear to be laid out in different ways, but most are the kind where you back up to them and this was one of those. You want to be pretty close to the charger as the cable is short. The charger will be the one on the left of the car as you back up. The rear view camera helps a ton but the parking sensors help you get close without getting too close. I love the measurement in inches that the parking sensors show you.

Once situated you pop the charge port as normal and insert the cable. This part I had some trouble with. First I had a red ring indicating a bad connection. I pushed on it a bit and got it to start blinking green. In the car it said “preparing for charge” and I waited. After a bit it told me “unable to charge.” I got out and unplugged the cable and firmly reseated it and then it went through the preparing phase again and then the charge started. I’ve seen stories that the connections are a bit finicky at times. If at first you don’t succeed try again before moving to another spot.

It goes through a “Starting to charge” phase, then it starts charging with both the volts and amps ramping up and down over time following some unknown rocket-science type algorithm.

It takes a little bit to ramp up but it quickly gets to an impressive charge rate. I seemed to peak at a charge rate of 346 miles/hour at 262A/374V. This rate can be misleading though since the amps and volts vary over time out of your control so you can’t do simple math on when things will be done.

After things were impressively moving along I explored the little shopping center. “Supercharger” sounds impressive and the technology is, but it was 8 parking spots on the side of a Walgreens. There’s also an Outback, Ruby Tuesdays, Panera, McDonalds and a few other things in the area all within walking distance. I went to Panera for a warm drink. 40 degrees at the end of April in the middle of the day — welcome to New England.

Another thing I noticed at the location is that 5 slots are marked for “Tesla Electric Vehicle” (it doesn’t say only though) whereas the other 3 are marked for general parking 30 minutes. In other words, you’re allowed to get “ICE’d” on those 3 spots. While I was sitting there one Walgreens customer took advantage of the 30 minute parking rule but otherwise the slots were all open. New England is still pretty devoid of Teslas per capita.

My charge finished at exactly 50 minutes taking me from 67 miles of rated range to 242 miles of rated range which was a 90% charge (what i’ve had it set to since I got the car). So that was 175 miles of charge in 50 minutes. Tesla recently sent me an announcement of the 100th supercharger (in NJ) with this quote in it:

At a Supercharger, a Model S can get up to 180 miles of range in as little as 20 minutes..

I got 175 miles in 50 minutes and that was with only 25% of range left in the car at the start. I understand from reading the forums that charges can go even faster when you start from near-zero but i’d have a serious case of range anxiety if I took it down too much further. I guess it’s possible that I could have done more than twice the speed if I had started at zero range left and/or if the weather had been “perfect”, but as usual Teslas quoted numbers on most things are overly optimistic and I would recommend planning for more time than they’re implying. Perhaps some day i’ll be brave enough to try a supercharge from zero range — but not in my first week of ownership!

All the displays on the car through the process were great. The one thing I wish they did was give you an estimated time to charge complete. The calculation isn’t simple since they’re varying charge over time, it depends on the state of the Supercharger, if the bay next to you is empty, etc. If it would pop up and say “You’ve got about 45 minutes to do something else” it would have been more helpful. I’m sure some smart people at Tesla can figure out how to do that.

In the end, I got 175 miles of range for free and the experience was great. I’d love to see a Supercharger somewhere more conveniently located between home and work. I can’t wait for an excuse for a road trip using Superchargers!

5 thoughts on “Supercharge Me!”