Following along the same lines as my recent review of the Remote S App I wanted to share some thoughts on the recent addition to the ConnecTT app by First Class Agile which also brings third party app support for Model S controls.

Similar to what Rego Apps did, First Class Agile appears to have taken the concept open source application from Eleks Labs and extended their existing application to provide Model S control from your Apple Watch. There are differences in the approaches both groups took and the different overall goals of the two groups.

One thing I should mention upfront is that both apps cost $9.99 in the Apple App store. The ConnecTT app used to be free but now (unfortunately) it seems they moved to a paid model.

This review covers the recently-released 2.6 version. 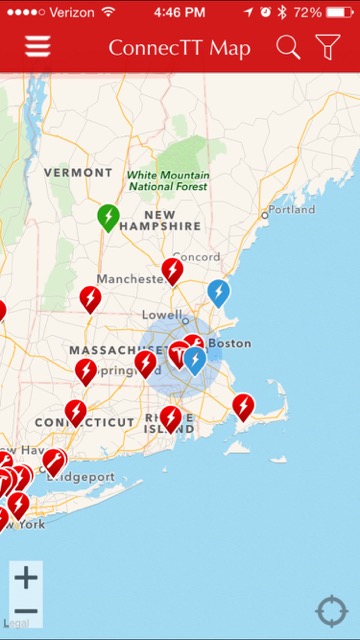 The ConnecTT app has been around for a while and their mission is pretty broad:

A must have app for any Tesla owner and Enthusiast! This app enhances the Tesla experience by keeping you connected to all things Tesla. Stay on top of additions to the Supercharger network by signing up up for Push Notifications, which allow you to be notified of new openings. Also, you do not have to be a Tesla owner to enjoy most of the functionality provided by this app. In addition, with our new Watch app, owners can now control their vehicle from their wrist.

I’ve been using the app for quite some time to check out visited Superchargers, explore new ones and add pictures/thoughts of my own.

There are several apps out there now for tracking details of various Tesla sites including Plugshare, Teslarati and ConnecTT. Each has their own take and approach. Of the 3 listed I like the ConnecTT app the least for this purpose. 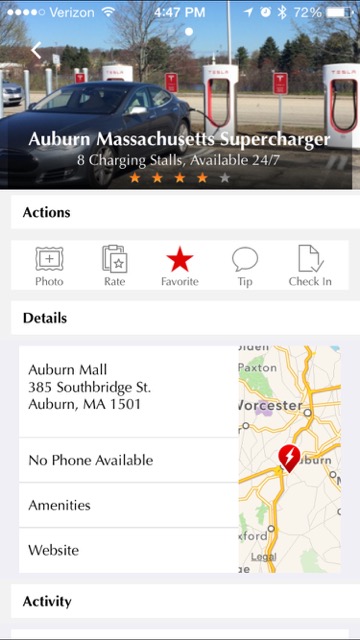 I do like some features of ConnecTT like the rating and check in systems, but the default zoom level when you launch the app isn’t very practical for the traveler. Its zoomed way out and its hard to quickly find the Supercharger you’re at and add your notes. There also seems to be very few people using it so most sites have little information for now.

Like many of the current generation of apps, there’s no way to suggest changes to the listed amenities etc so you have to crawl through comments/tips to find the real story which is quite cumbersome.

A real plus with the ConnecTT app is that it includes notifications of new chargers coming online (something i’m a fan of as evidenced by my automated tweets along the same lines). They also include stores, service centers and Superchargers under construction which is a really nice touch although the destination chargers are unnecessary noise.

ConnecTT also includes stores, service centers and Superchargers under construction which is a really nice touch although the destination chargers are unnecessary noise.

You can access the information in a map form or in a scrollable list by state/region which is also very useful for the traveler. Flagging your favorite destinations lets you quickly jump to those places to find updates, see who has recently visited, etc.

In addition to the features above, there’s a News section which I found pretty light and generic. Its well done visually, but its missing key Tesla-oriented news sources like Teslarati and leading independent blogs like mine :p

There is also an interesting feature which puts out a call for help to people on the ConnecTT network with a short message, your provided phone number and your current location. I didn’t test it and I’m not clear on how useful it would really be (they can’t charge your car, they can’t tow you, etc).

Like the Remote S app, the ConnecTT phone app does provide some Model S controls in the most recent version, but they’re very rudimentary: 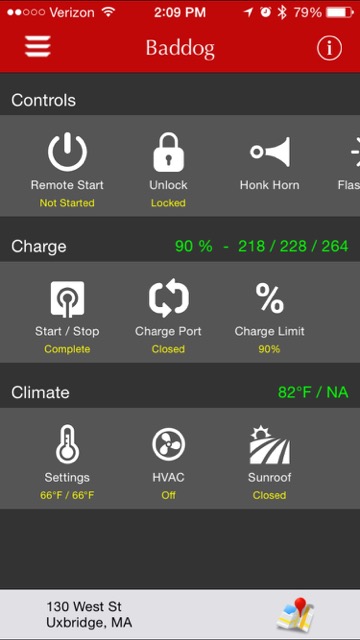 There are layout issues, the graphics are not great, and overall its not designed. I don’t know why anyone would use this interface over the one Tesla provides except for the few things you can’t do from the Tesla app like fully opening your sunroof: 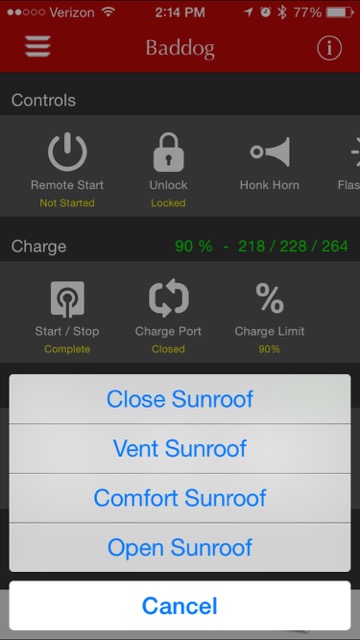 The phone app app is pretty rich for the traveler and is completely Tesla-oriented — no L2 chargers here. The newest addition to the app is the Apple Watch support.

The ConnecTT watch app is very similar in functionality to the Remote S app using all the controls that Tesla provides in their undocumented interface. Beauty is in the eye of the beholder, but I found the ConnecTT to be more polished visually and more clear in what each item did.

While using the app I did run into a stability issue on first launch sometimes where the watch app would just quit, but on a relaunch it would work fine. Some of these bugs were fixed in the recent update. While “Remote S” has been updated to fix the km vs miles issue, the ConnecTT app was more polished from the start with the exception of that infrequent crash on startup.

As with the “Remote S” app, the best way to really show it’s capabilities is a collage of the screens: 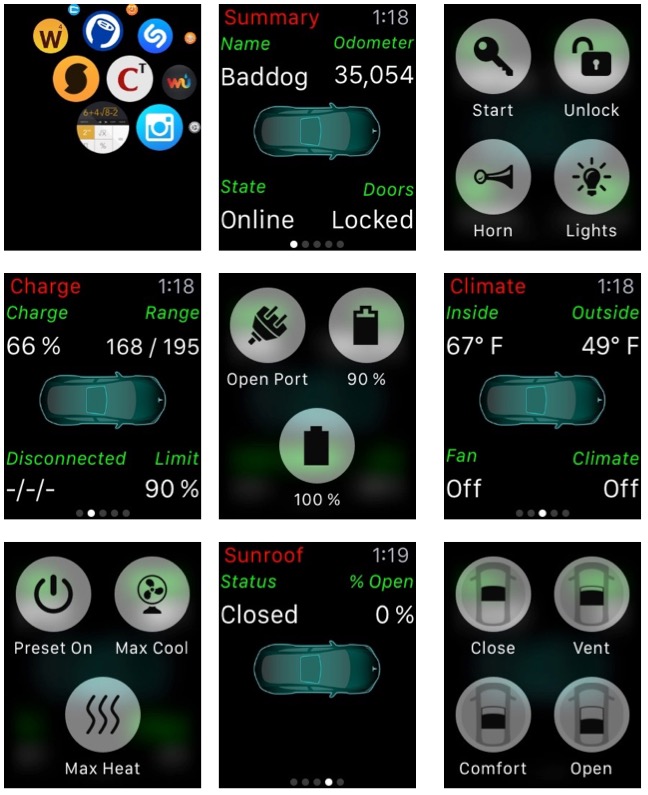 Like many watch apps, the ConnecTT app also provides a glance too which offers a bunch of information in a single glance. I didn’t find to be as good as the one provided by the Remote S app: 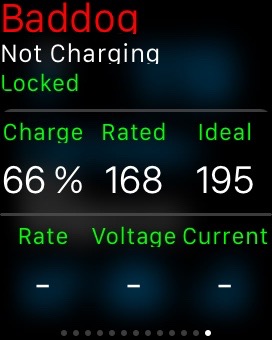 The ConnecTT glance is not useful to me.

Since I recently reviewed the Remote S app I decided to put together a little table comparing these two apps. They have different missions, Remote S is all about just controlling the Model S while the ConnecTT app has some grander visions and either one or both may be useful depending on your needs: 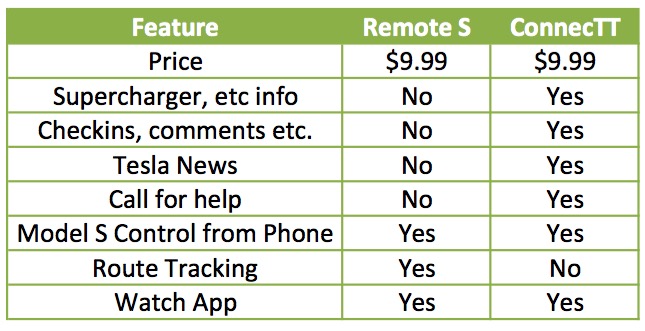 The Eleks Labs team did us all a favor by providing open source for the apple watch app to control the Model S which other teams could use to build these apps.

With the ConnecTT app update to add Model S control owners now have another option to control their Model S from their Apple watch and phone. While both apps are still young and show a few bugs here and there, they’re both also very functional.

Note that neither vendor offers support for the Android ecosystem, so for those of you who are not Apple fans you’re going to have to wait a while longer.

UPDATE: Thanks to “Andrew” in the comments below for finding that ConnecTT was no longer free.