A while back I wrote about Tesla’s 7.1 software update and the “Homelink auto open/close” functionality. Back then I had trouble getting the feature to work reliably and I wanted to provide an update after some extended use.

Getting Auto Homelink to Work

Homelink auto open/close was added in Tesla’s 7.1 release in January 2016. Other than small (mostly undocumented) releases we’re all still waiting on the next software release whether its 7.2 or 7.5 or some other version. A while back Elon promised some more User Interface updates to the main 17″ display and Tesla has yet to deliver them so I assume those will be here “soon.”

While living with 7.1 for a while and using the Homelink functionality for many months now i’ve come to really appreciate the feature and it works for me about 99% of the time, but it took some fiddling to get it to a happy place. 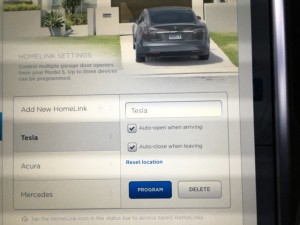 I have a 3 car garage (you’ll see in videos later), I had all 3 doors programmed into my home link so I can close any other doors that are open when i’m leaving. From discussions online it seems not that many people did this, but for my setup it seemed to cause confusion for the system.

When I originally set up Homelink 2 years ago, I programmed my three doors right in front of each door. Garage doors are obviously near each other and non-military GPS isn’t very accurate, so there’s a chance for the car to be confused about which door its supposed to be operating.

To remove any possible confusion for the system I drove away from the house and for the doors I don’t need to auto-open I did a “reset location” operation.

I found that triggering auto open right in front of the garage isn’t necessarily the best place for that as there’s a time delay from the trigger to the garage door opening and there is distance and movement involved.

With the door I wanted to auto-open I tried a few locations, performing the “reset location” operation until I got it just right.

Tip 2: Adjust your main door location until the results are reliable. 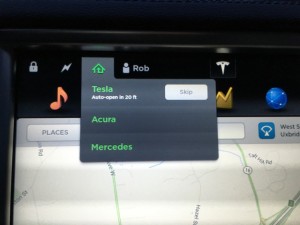 For various reasons, my charger is at the rear of my garage which means I need to back into my garage daily. Thanks to parking sensors and the great rear view camera its never been an issue for me.

So as I pull up to my garage I swing in towards the garage and then angle away so I can back in. Getting the open position just right took some time but it was worth it.

In the video below you’ll see the door start to move about the time I get to the 2nd garage door. I didn’t press any buttons, it just did this for me and does it correctly about 99% of the time:

Homelink Auto Close is a little more flaky for me even after some tweaks. The hardware for homelink in the Model S only exists in the front of the car and since I back into the garage the hardware is pointed away from the garage and moving away from it as I leave.

I found that if I just slow down a bit as I leave the odds of success are better. It fails enough that i’m now used to double checking that my garage door didn’t stay open before I get all the way down the driveway.

For some reason bad weather seems to make this worse. I’d say auto-close works about 80% of the time which is just enough of a failure rate to be annoying but not enough for me to give up on it. I really wish Tesla had hardware in the front and the back to handle this scenario. Perhaps they’ve already done that on newer cars.

Here’s an auto-close event in action.

Homelink auto open/close is a small feature Tesla slipped into a minor release. While it was intended to help the Summon feature and Autopilot cars, its been very helpful to me as a “classic” Model S owner.

One of my big concerns as Tesla continues to grow and expand is that they neglect the original buyers of the Roadsters, Model S’s etc and focus on just the newer cars and needs. A crazy amount of software effort has gone into those Falcon Wing Doors, and now probably a HUD for the Model 3. Meanwhile, the Navigation system (on all cars) is still severely lacking in some areas (waypoints anyone?) and many of these other areas could use some tuning/updates.

So, while i’m thankful for new additions like Homelink auto open/close, i’d love to see Tesla continue to dedicate a few resources to improving things that can help all current and future owners like the UI, Navigation, etc.